Nature Corner: On Track in Winter 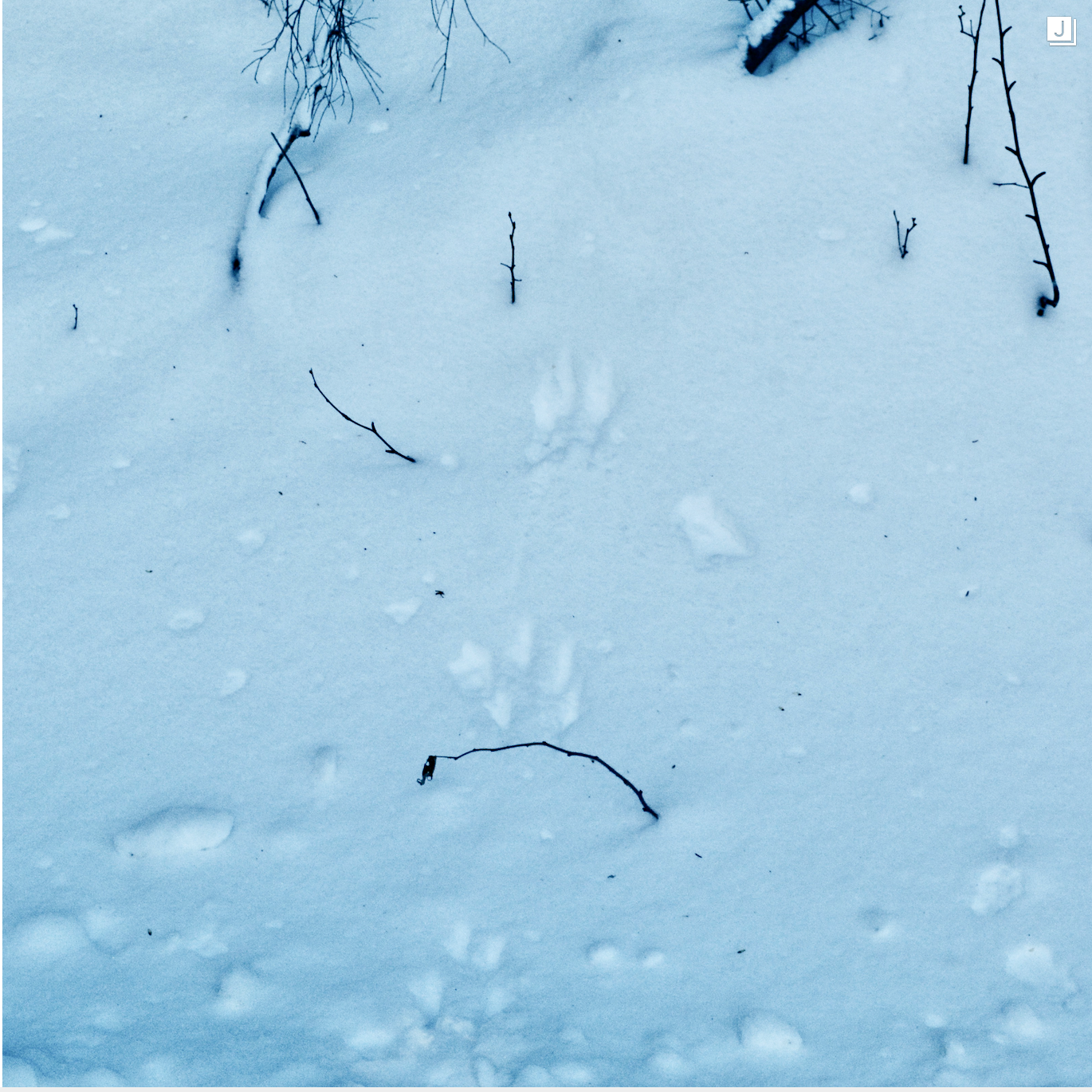 After a snowstorm, when our landscapes are blanketed with fresh snow, is the perfect time to put on your detective hat, head outdoors and discover the stories of which animals have been out and about in your backyard. A quick and easy way to determine the identities is to “mind the 3 p’”s: print, pattern and place.

Pattern (gaits): Look for the patterns. Pay attention to the length and width between footprints. Is it a waddler, bounders, walker, or hopper (galloper)

Place: Where do you see the footprints? i.e. Footprints that lead to the base of a tree and then stop, tells a story of its own.

So head outdoors, put on your investigator’s hat and have fun!

Who Goes There? Identifying Animal Track

Nature Corner: The Tick Terminator…With Luck, It’ll Be Back! 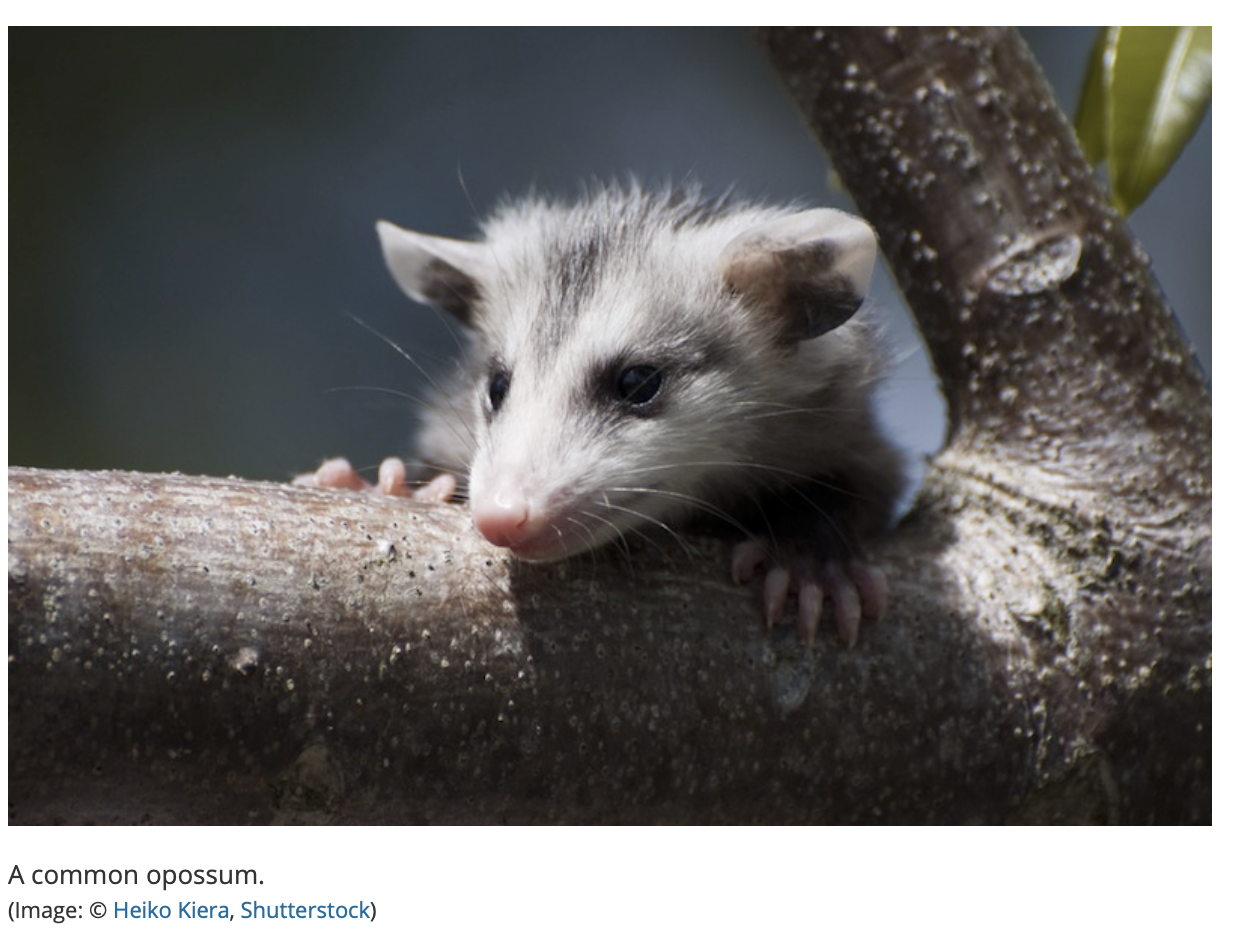 While our recent snow might put the thought of ticks into the background, disease carrying deer ticks do not die off in the winter.   Although it does slow down in the winter months, there is one unsung hero who kills 95% of the ticks who cross its path. The Virginia Opossum, America’s only marsupial, is a virtual tick terminator. A conscientious groomer, the opossum cleans its fur, swallowing most of the ticks it encounters.  Scientists estimate each opossum can destroy up to 5,000 ticks in one season.  For more information on this admittedly strange looking mammal we have several sites for you to explore.

The gorgeous orange and black monarch butterflies are a sight to be seen late Summer and early Fall, 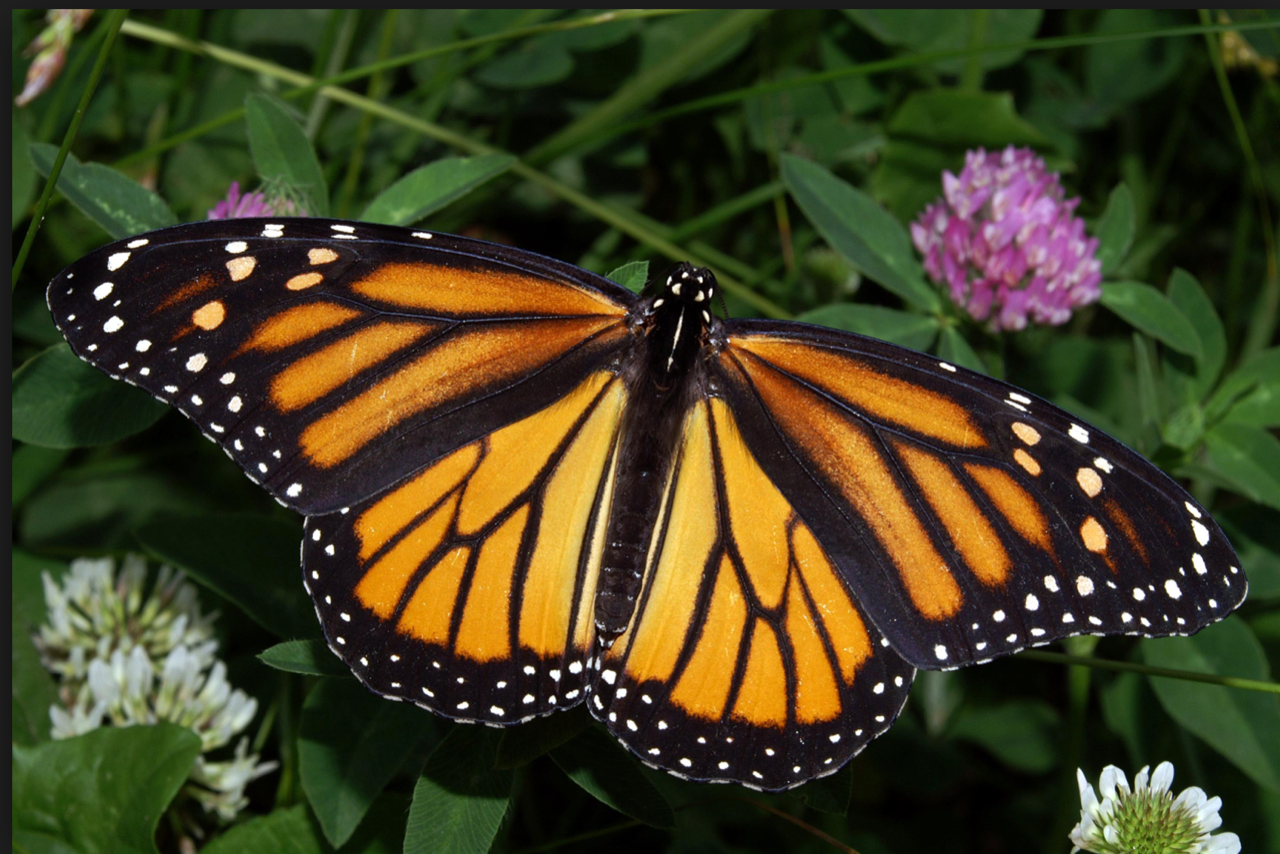 before they begin their migration sourth. A favorite activity in elementary classrooms is the hatching of monarch cocoons where children bring in milkweed leaves to feed the hungry yellow and black caterpillars.  Yet due to the clearing of land in many areas, the milkweed plants are fewer and as a result, there is a decline in the monarch population. Monarch caterpillars need milkweed leaves and plants to survive.  It is the only plant, the caterpillars wlll seat. The adults drink the nectar (along with other flowers).  Due to land clearing, there are less milkweed plants for the monarch populations, but we can help by actively propagating the planting of milkweeds in our fields and gardens

Create a Habitat For Monarchs

For those of us who suffer from seasonal allergies, pollen counts will continue to rise from late Summer until the first frost.  The misnomer of “hayfever” is actually our allergic responses to a a small, innocuous looking plant called Ragweed.  A single Ragweed plant releases billions of pollen to ride on the wind and land on other ragweed plants, as well as into our homes and sinuses.  Another blooming plant, Goldenrod is mistakenly blamed for our seasonal woes.  Goldenrod’s pollen as a contrast is heavy and sticky.  It is transmitted from plant to plant by the many visiting insects it attracts. Both plants have the same blooming time period.But the brilliant yellows of the Goldenrod plants attract our attention; and as a result are mistakenly blamed for our allergy woes.

Monarch Butterflies lay one egg at a time on a milkweed plant (Asclepiadaceae.). Although the adults will drink nectar from a variety of lowers, they are considered pecialist feeders, because their caterpillars will only eat a specific kind of plant (milkweeds), and cannot survive without it. Milkweed plants contain toxic chemicals (cardenolides) which can be destructive to horses, cows and deer, but not the vibrant black and yellow caterpillars of the Monarchs.  Through the whole process of metamorphosis, the chemicals are stored in their bodies and when they emerge as adults, the chemicals are still there.  Their bright and orange colors warn predators to “stay away”!

How To Raise Monarch Butterflies at Home

What Do Monarch Butterflies Eat 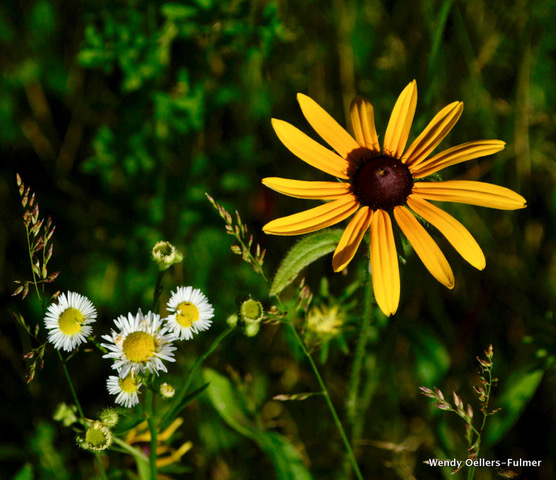 Winter seemed endless this past year, with cold, rainy weather into June.  Yet a walk in the nearby fields ands woods show a hearty bloom of ever changing wildflowers. .  The common buttercups, Hawkweeds, white daisies and birds-foot trefoil of early July are turning to seed, making way for Achillea, Black-Eyed Susans,  Daisy Fleabanes, Hops Clover, Pearly Everlasting and St. John’s Wort.  Although for humans, the long winter and cool temperatures were daunting, it seemed to have provided the  perfect growing conditions for our wildflowers.

A common scent and sight right now are the native clovers that grow wild in NH.  Red clover, White clover, 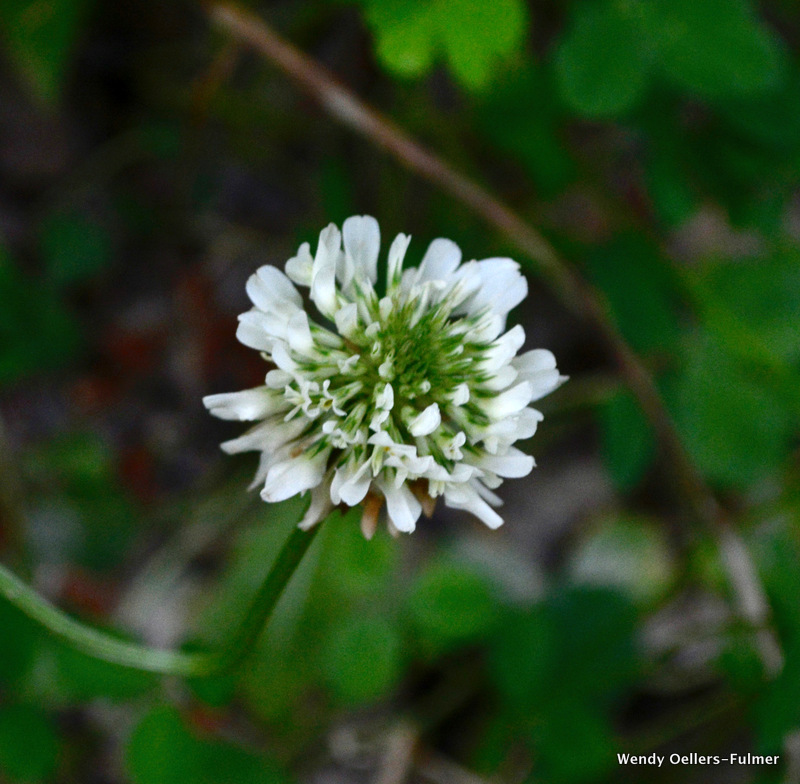 and Hops clover can be found in our yards, fields, road sides, and meadows from Spring through the Fall.  These sweetly scented flowers are members of the pea family and are more than just decorative..  Red clover has been traditionally used to treat health issues from respiratory to hot flashes.  White clover has been used as tinctures for gout and hops clover has  nutritional uses from teas to nutritional flour.  Bee keepers especially love the sweetness clovers bring to their honey.

Another sign of Spring is the return of Tree Swallows.  These aerial acrobats of our

skies swoop and glide back and forth in their dawn to dusk quest searching for insects.  Although considered a common visitor, the gregarious and iridescent agile fliers have actually decreased by 49% in the eastern and western parts  of the US from 1966 to 2014, due to the decimation of forests and lack of natural tree cavities. The industrious female does most of the work building her nest, while the male watches guard.  After using a variety of materials, she will often use feathers to line her nest.  Bird boxes offer an alternative housing opportunity.

More Information about the Tree Swallow

Last week at our library, Dr. Stephen Hale presented an entertaining and informative session about birds in the White Mountains.  One of the questions he received was how to tell the difference between these familiar visitors to our feeders, the downy woodpecker and hairy woodpeckers,.   He informed us, “you can’t always tell by size, as on occasion downys can be larger and hairy woodpeckers smaller.” He advised the best way is to note the size of their bills.   The downy’s bill is small in proportion to its head, while the hairy’s bill is large.  You can also tell by their outer tail feathers.  On the hairy woodpecker, these feathers are pure white, while the downy can have black spots.

One of the annual gifts of living in New Hampshire is the profusion of wildflowers that bloom each year, especially in late Spring.  Currently on a walk outside into the fields or woods, you will find a rainbow array of colors from tiny forget-me-nots, 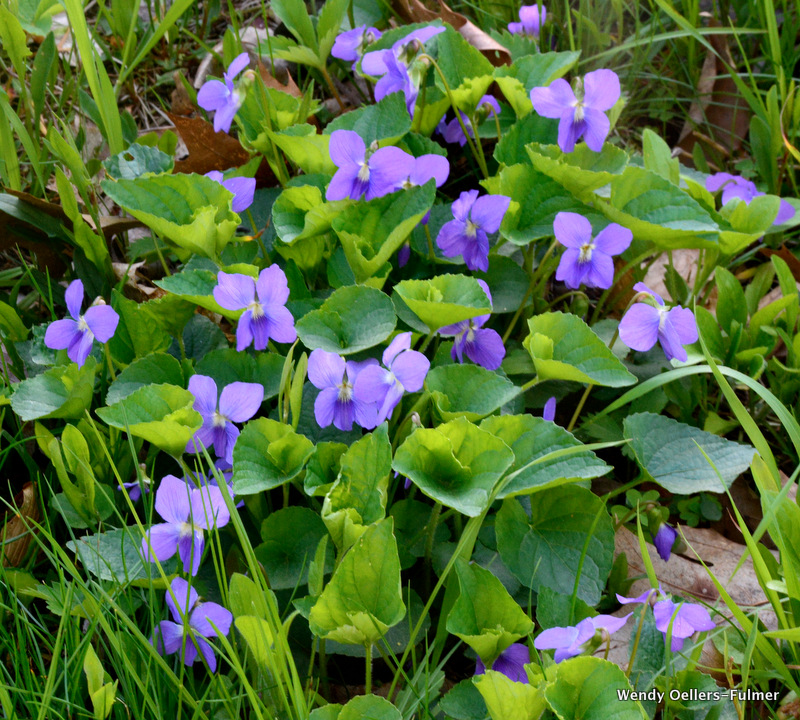 Cpurple violetsanada Mays and wild strawberries, to bright fields of yellow field mustard and blue/purple violets.   A fun hobby is to head outdoors with your wildflower guidebook and record when, where and date of your discoveries.  You can compare this information each year to discover how weather, like our late to come Spring, can impact the blooming of these beauties.

A Good Site to ID Wildflowers

With a Little Bit of Luck 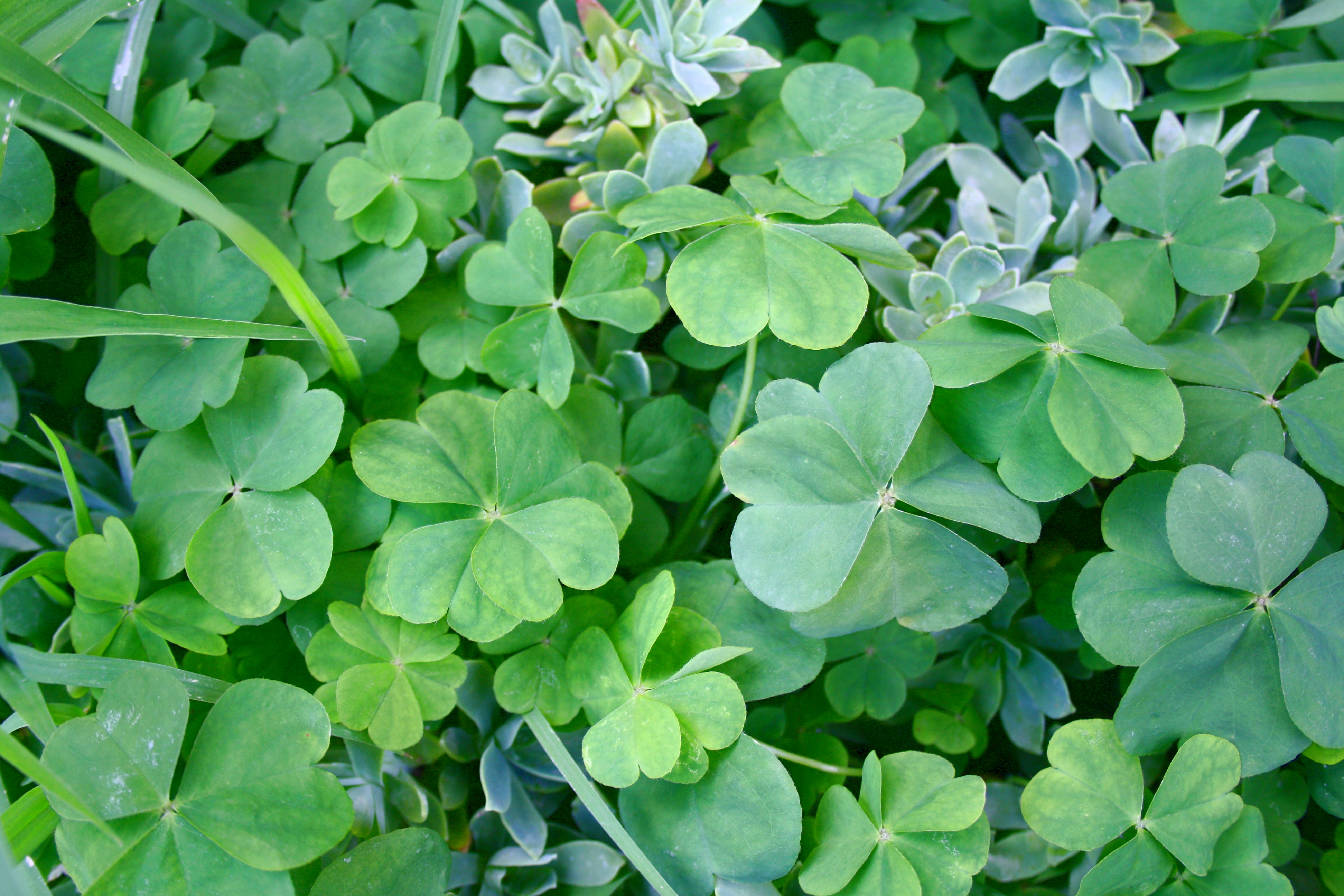 Did you know that the odds of finding a four-leaf clover in a typical patch is about one in five thousand? Tradition has it, if you find one it will bring you faith, luck and love.

While scientists have been studying what determines this extra leaflet, determined collectors have reached up to 170,000 four-leaf clovers during their lifespan. The world record for an hour, was reached by an American, Katie Borka for 166 on June 23, 2018. But did you know that clovers can can actually up to five leaves? Just imagine what that extra leaf would bring? 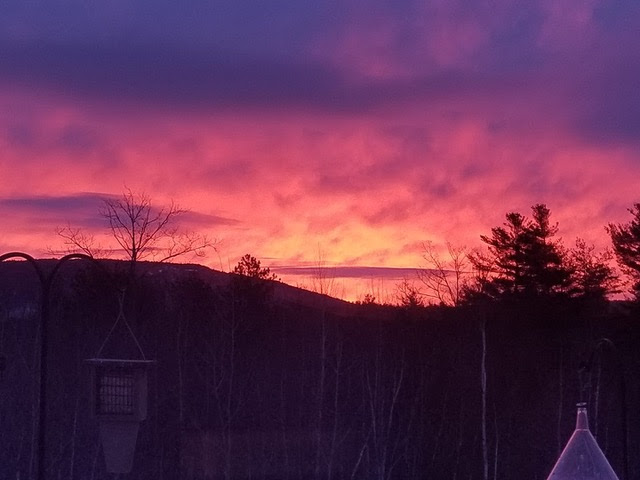 On Sunday, about 40% of countries worldwide set their clocks ahead of standard time for Daylight Savings Time (DST); in efforts to save energy and take advantage of daylight. Austria and Germany initiated the practice in 1916 to save fuel for the war effort which was quickly supported by England and France. After the war, they returned to standard time, only to reinstate DST during World War II. Although Germany and Austria were the first countries to use DST, an intrepid group of Canadians beat that clock by 8 years. On July 1, 1908, the clocks were turned forward by 1 hour in the town of Port Arthur, Ontario. Other cities followed the practice and by 1916, it became one of the bylaws in Canada. One advantage of getting up an hour earlier was watching the sunrise. Picture was taken on Sunday.

Where are the Chipmunks? 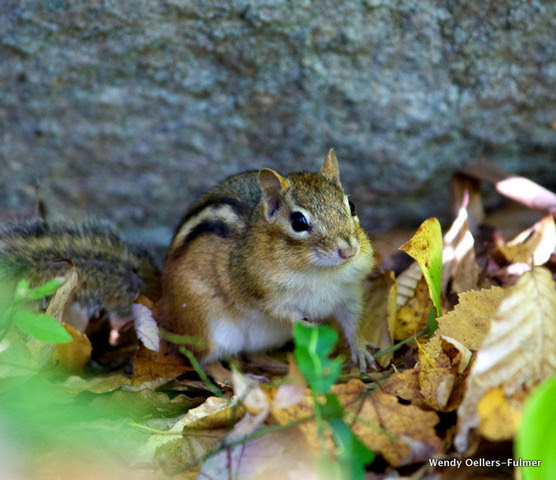 Although red squirrels and gray squirrels are frequent visitors to our yards and feeders, missing is the smaller but familiar sight of a chipmunk. Where are they?

These busy little creatures spend their summer and early fall searching and storing food which they will need for winter. Chipmunks build underground burrows and in the fall, make sure there are adequate stores of food. Unlike true hibernators, chipmunks will wake up out of a deep sleep every few days. They’ll raise their temperature enough to eat the stores of food in their burrows and eliminate. During deep sleep periods, their heart rate can drop to 4 beats a minute and their body temperature can drop to 40 degrees. 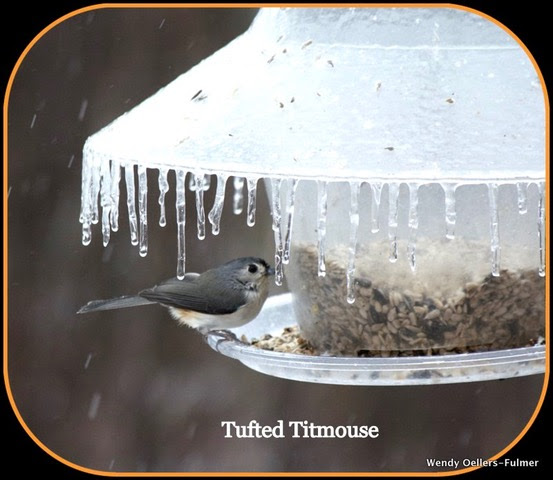 Our previous Nature Corner, explained why it’s important for birds to find sources of water in the winter time. One suggestion was a heated birdbath which leads to myth #2. When temperatures are below freezing, a bird who bathes in the water will freeze and die as a result from wet feathers. Bathing for birds, even in winter, is a medical necessity. It helps to keep the microbes and potential diseases at bay. Birds have an oil sac at the base of every feather. When they preen, they literally drag the oil the entire length of the feather making it virtually waterproof. Despite all the ice we see around us, you can find open channels in waterways which is where birds also find water sources. 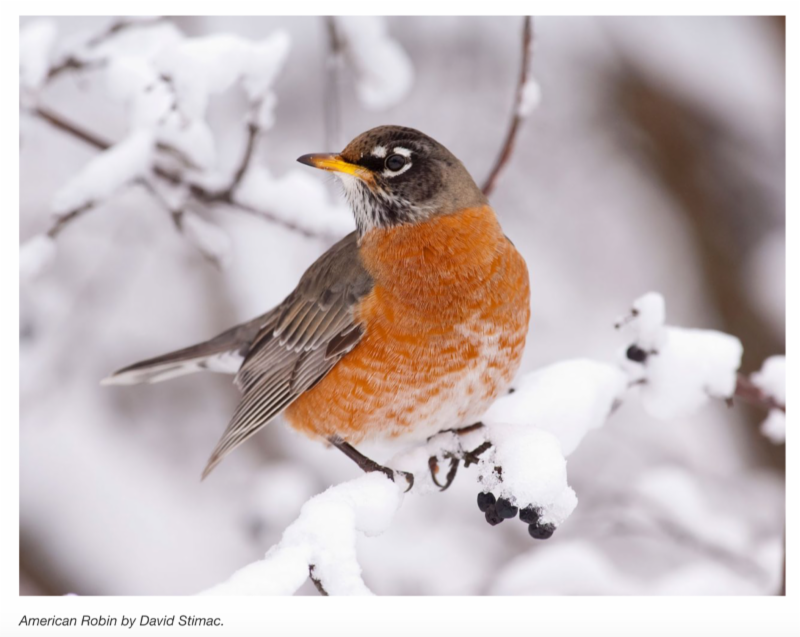 The fireside for the Cricket, The wheatsack for the Mouse, When trembling night-winds whistle And moan all round the house; The frosty ways like iron, The branches plumed with snow- Alas! in Winter, dead, and dark, Where can poor Robin go? Robin, Robin Redbreast, O Robin dear! And a crumb of bread for Robin, His little heart to cheer." by William Allingham

The next few Nature Corners will feature commonly held beliefs about our winter birds which are actually myths. The first one is about the American Robin. It has long been an iconic symbol as a harbinger for Spring. We were taught as children that robins migrated south for the winter and came back in the Spring.  In actuality, if there is enough food in their breeding ground areas, they will stay local. Landscaping featuring shrubs with berries is one source of food and thought to be one of the reasons we are seeing more robins all year long. Robins are also insectivores (diet of insects and worms) and will search among the bark of trees for hibernating bugs.

Signs of Spring: A Sky Filled with Song 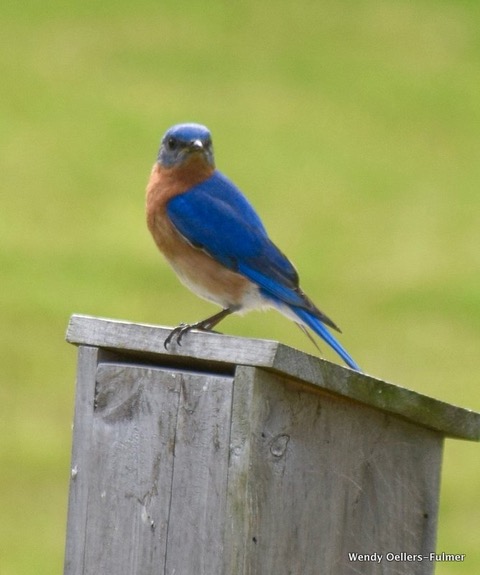 As the sun rises earlier each morning in the Spring, we are also awakened to what is called the dawn chorus. From the silent sounds of winter, we now hear a cacophony of sounds that greet each day. Trills, tweets and melodious songs begin even before the sky begins to brighten. This bird band consists of mostly males trying to attract mates and/or defend their territory. One theory is the songs seem louder because the early morning air is clearer and drier. But scientists have found holes in this theory and suggest the more powerful singers send the message that they are the most worthy mate for the female fans. Enjoy this sweet serenade while it lasts. By late July as the males' energy goes into helping to raise their young, this dawn concert will fade away leaving only a few troubadours still singing their songs.

For more information on the Dawn Chorus:

Birds Sing in the Early Morning